When Kharmos, in Arcadia, once entered in a race
competing with five runners, he came out in seventh place.
A curious result, and you’ll be saying ‘How in heaven,
with six men in the race, did Kharmos finish no. 7?’
The reason’s this. A mate of Kharmos, shouting ‘Go, you’re fine’
ran fully dressed around the course, and beat him to the line.
So Kharmos finished seventh, but here’s to his sporting health:
if he’d had five more friends, just think — he would have finished twelfth.

Mark Ives, who teaches Classics at St Gabriel’s School in Newbury, drew my attention to another example of Nicarchus’s epigrammatic wit (Greek Anthology 11.395):

A fart suppressed brings many to their death;
Released it rescues with its rasping breath.
So if a fart both stops death and death brings,
Its power is no less than that of kings.

They told me, Heraclitus, they told me you were dead;
They brought me bitter news to hear and bitter tears to shed;
I wept as I remembered how often you and I
Had tired the sun with talking, and sent him down the sky.

And now that thou art lying, my dear old Carian guest,
A handful of grey ashes, long, long ago at rest,
Still are thy pleasant voices, thy nightingales, awake;
For Death, he taketh all away, but them he cannot take.

William Johnson Cory was the Victorian Eton schoolmaster who wrote this haunting translation of an ancient Greek epigram, Callimachus’ lament for his friend the poet (not the much earlier philosopher) Heraclitus. In Greek (Callimachus Ep. 2 Pfeiffer) it consists of three taut and simple elegiac couplets:

My translation here aims to capture the less sentimental quality of the original:

Someone mentioned, Herakleitos, you were dead, and tears
came to my eyes. It  brought to mind the times we two
had seen the sun set on our conversations; ah, but you,
my friend from Halikarnassos, have been ashes all these years.
Your songs, your nightingales, live on; though greedy Death commands
that all come to his realm, on these he will not lay his hands.

Cory also wrote the paragraph below, summing up what he saw to be the purpose of education at Eton. It expresses sentiments that nowadays might be more apt to education at university level (at least in places like Oxford and Cambridge where the tutorial system still exists) than to the more inflexible style of schoolteaching required to achieve good results in the league tables.

The shadow of lost knowledge

To this marvellous paragraph might be added the equally splendid essay by the conservative political philosopher Michael Oakeshott, written in 1950, entitled The Idea of a University. It is worth reading in full, but perhaps its most ringing paragraphs are the following: 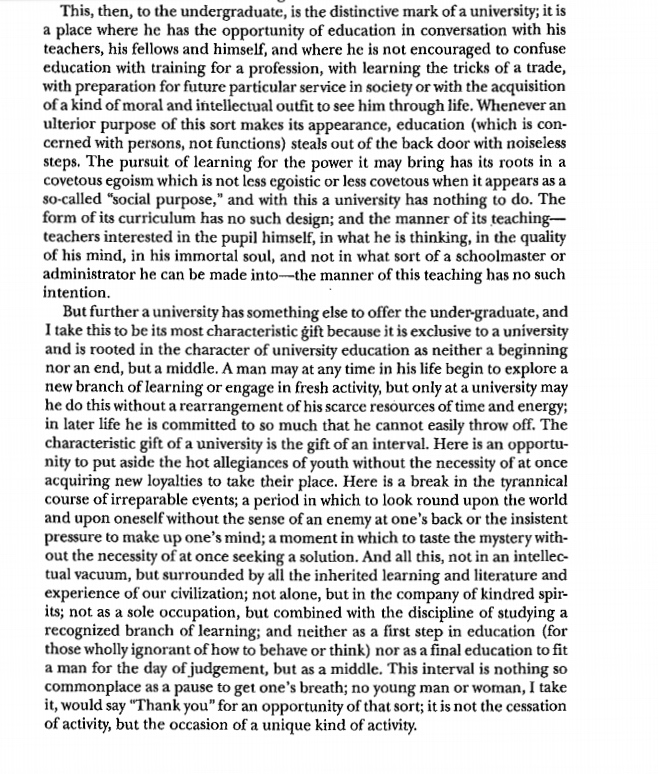