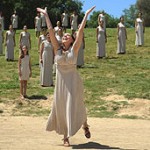 “O noble Rhodian lady,
how come you here, explain!
By ancient custom, women
are barred from this domain.”

“I have a nephew, Eukles,
who won Olympic fame.
My father, son, three brothers,
are honoured for the same.

So you are bound, good Judges,
to let me honour now
those glorious men, who wrestled
to win the hero’s bough.

I praise their manly natures —
no common woman I —
my kinsmen shine for ever
with light that does not die.

Married women were not allowed to attend the ancient Olympic Games on pain of death, but Kallipateira attended disguised as a man so as to watch her son compete. When the young man won his event, she jumped up in delight and revealed herself as a woman. Brought before the Olympic Judges, she cited the Olympic successes of her family members, in particular that of her father Diagoras of Rhodes, whose boxing triumph had been celebrated in a magnificent Ode (the 7th Olympian) by the poet Pindar. The Judges honoured her for the pride she took in her family’s record of victory, particularly since Diagoras’s triumph had been celebrated in a magnificent song by Pindar, the greatest poet-musician of Greece.

Note on the translation:

My attention was drawn to this poem by the distinguished translator Tim Ades, whose own excellent English version is closer to the sonnet form of the original. As with my version, Tim’s begins with iambic dimeter couplets, but his English then moves into a different scheme that more closely matches that of the Greek. It can be read on Tim’s website here.

I wanted to continue with the same verse scheme through to the end of the poem, as the poem builds up to its homage to Pindar in the last line, and I think the retaining the metre – which is essentially that of Macaulay’s stirring Horatius (‘Lars Porsena of Clusium/By the nine gods he swore…’)-  reinforces the effect. However, sometimes it is all in the reading, and I have heard Tim’s version superbly read by the actress Lucy Tregear.

The poem in Greek