John Owen (c. 1564-1622) was famous in his day throughout Europe for his Latin epigrams, which were based on those of the Roman satirical poet Martial. He was a curmudgeon, whose trademark sentiment is (Epigram 1.58, to his friend Edward Noel):

‘Times change and we all change with them along’;
How? Human beings just go from wrong to wrong!

This is thought to be the form of the epigram known to Haydn when, over a century later, he prefaced his Symphony No. 64 with the words ‘Tempora mutantur etc.’ 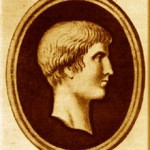 Owen’s Latin squibs deserve to be translated so that people can enjoy his brilliance, even if the age in which he lived was no more politically correct than that of Martial. Here I have translated a selection of Martial epigrams and some of Owen’s, to show how the latter emulates his model’s virtuosity and sometimes his savage satire.

Tough/kind you are, the joy/bane of my heart.
I cannot live with you, nor live apart.

Orpheus retrieved his wife from Death, they tell.
What wife has ever saved her man from Hell?

A single verse can’t speak my love for you;
So here’s a couplet — if two lines will do.

Virgil took Ennius’s poetry and made from it
What all good doctors make — gold out of shit.

‘Nature abhors a vacuum’, Marcus. Is that what you say?
The fact that there’s a vacuum in your head is clear as day.